The Elephant Lake / Peterson Road is known to be one of the most beautiful drives in Ontario. The winding 34 km travels from Harcourt on highway 648 (known as the Loop Rd) to Maynooth. It is famous for sending a vehicles compass in circles as it twists through the best views the Eastern Highlands has to offer.

Visual artist Sheila Davis knows the untamed Ontario landscape well. For the past 6 years it has been the focus of her attention bordering on an obsession. She sees beyond the pretty landscape into the chaotic clutter, the texture and patterns of light, shadow and the colours that push themselves from the shadows into the retina with an exciting awareness of what is there to be seen.

“A few years ago I stopped at a friends on my way to Whitney. They suggested I take the Elephant Lake Road. I was blown away. It never seemed to end and I was bombarded with as much colour and texture as Mother Nature could throw my way. When I was offered this exhibition there was no question what needed to be focused on, I had to make others see it as I saw it.”

She considers the East Highlands her “go to” location for inspiration with its natural forest, rocky out crests, pristine waters and hidden winding roads.

An elected member of the Society of Canadian Artists and the Ontario Society of Artists, Sheila’s work has been featured in magazines, on television and is included in private and corporate collections around the world. She is represented by various galleries in Ontario and participates in select exhibitions throughout the year. She works in oil, painting both plein air and in the studio, preferring large panels. Using dynamic brushstrokes and saturated colour she simplifies and animates passages often overlooked. She paints on deep cradled birch panel custom made by Day and Night Woodworking Toronto. Her ground of choice, the wood gives a drag and texture to the brushstroke that can’t be acheived on canvas.

This exhibition  features mostly large works. Accompanying each painting will be a map of the journey marked with the location and the image as she saw it, daring the viewer to travel the road, catalogue in hand and step into her mind’s eye and feel the rush. 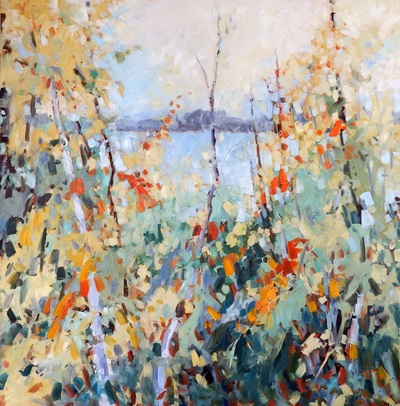 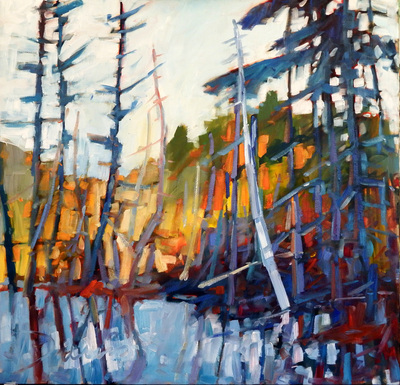 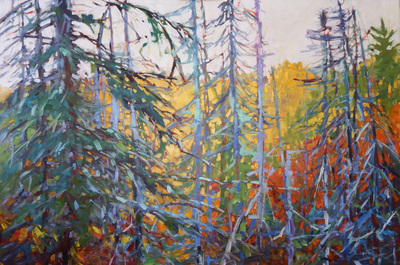 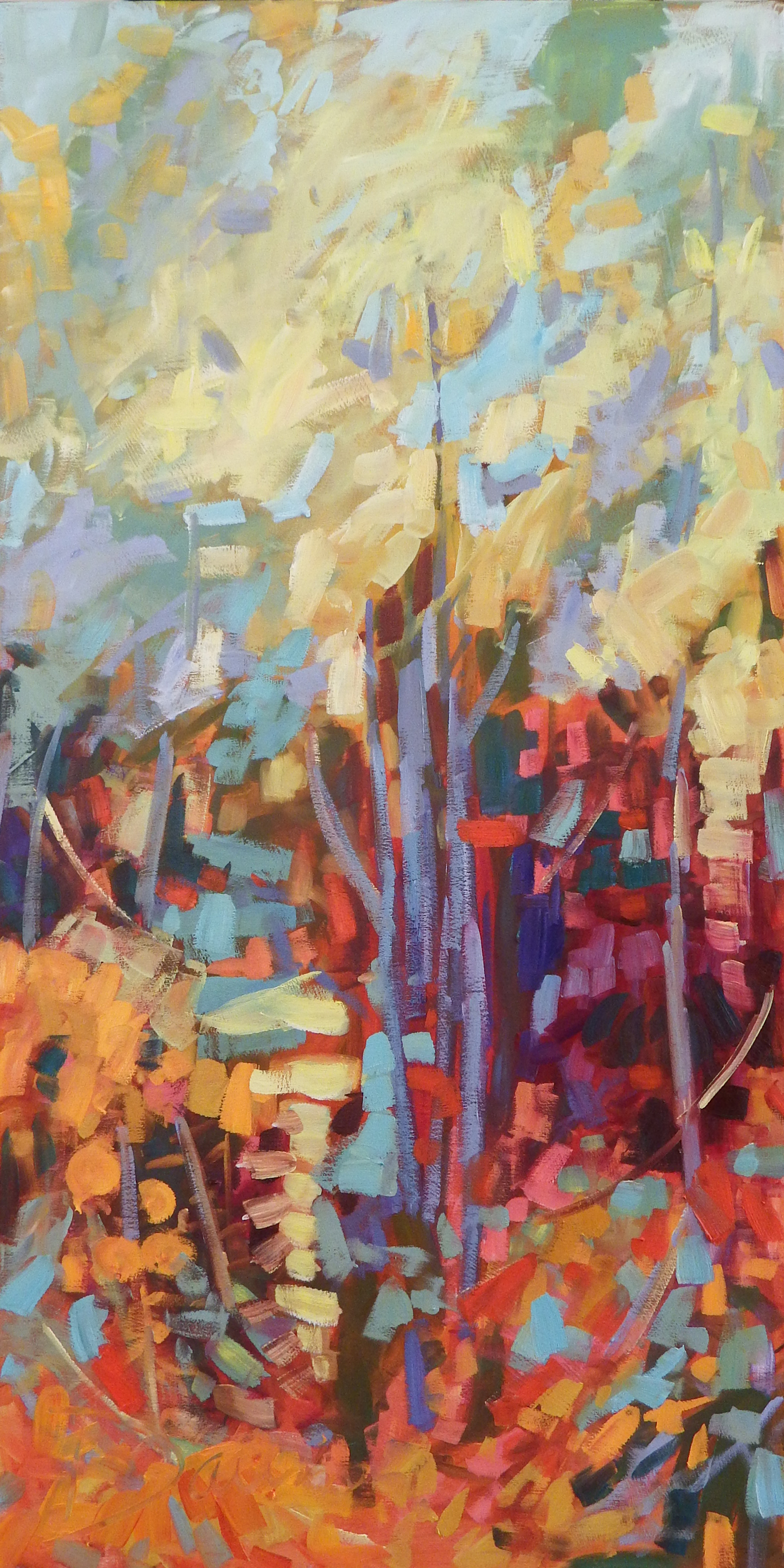 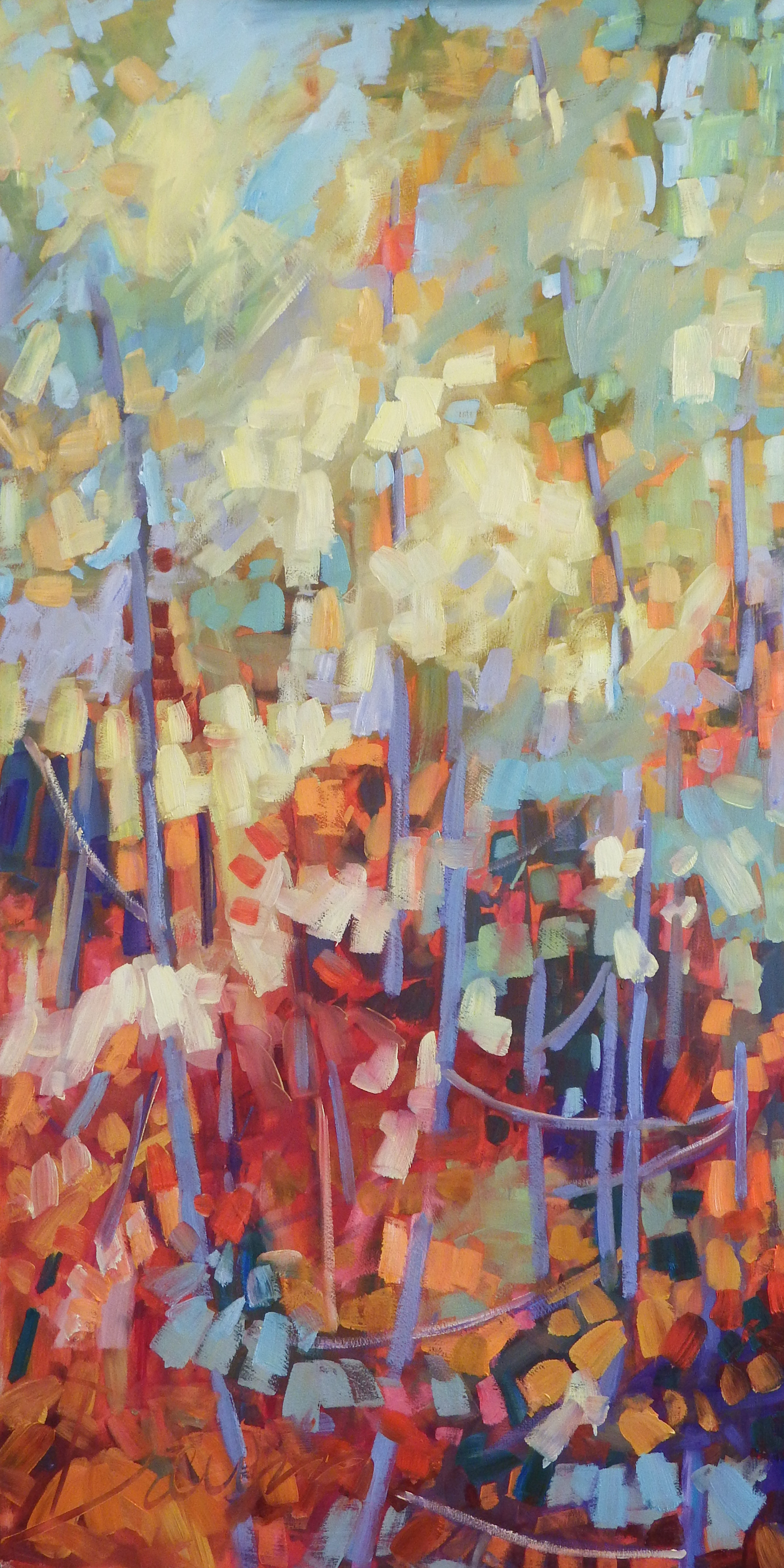 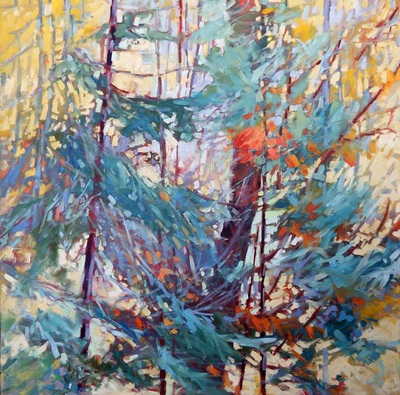 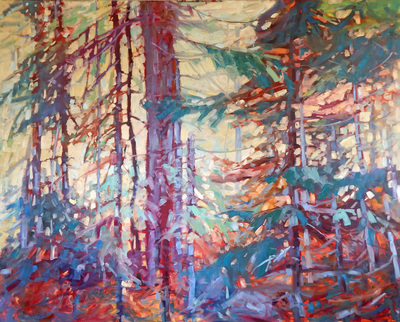 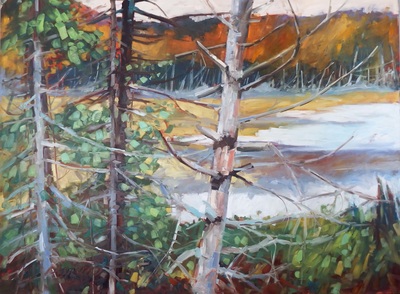 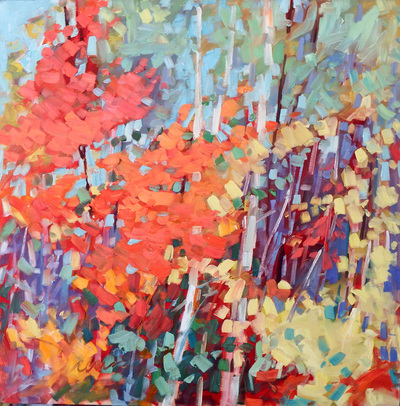 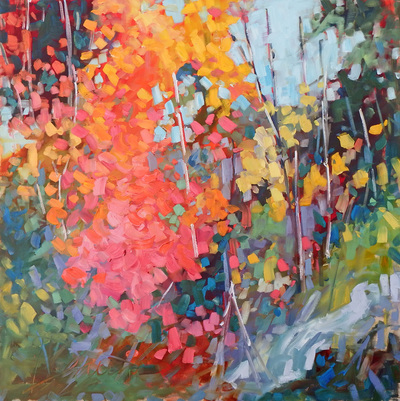 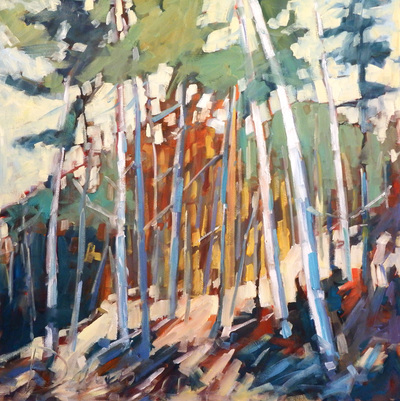 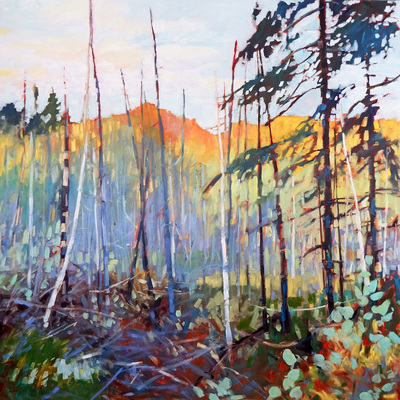 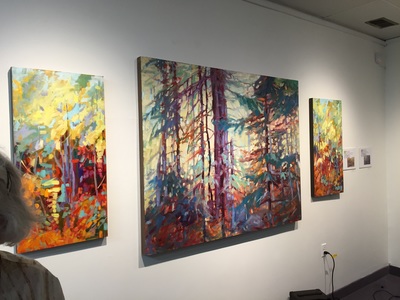 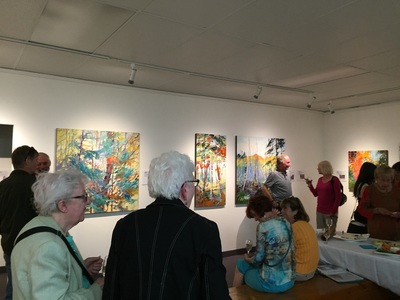 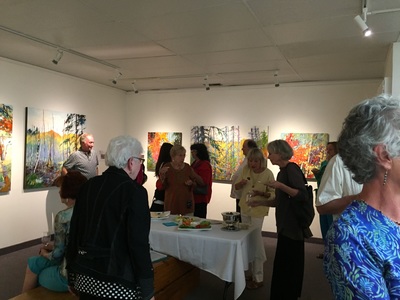 News article from Bancroft THIS WEEK

On the evening of Friday, July 10, the Art Gallery of Bancroft (AGB) had the chance to meet and digest the wonderfully worldly colourful and intimate landscape works of artist Sheila Davis. Oil paintings filled the evening and walls with a sense of being in the wilderness in an eloquent manner as Davis’ paintings are focused and based upon profound connections, emotions and a spiritual sense of perceptions of places she has visited. Becoming enamored with certain nooks in places like forests in Canada, Davis loves the rugged and untamed quality they hold for her work as well as for her working environment as a creative person. Having traveled through Europe and despite being taken by its beauty, she still reveled that Canada’s beauty is by far the most cherished and favored place to be within and travel for her.
Sharing with other’s the beautiful places she sees, places like “Canada’s forests, the tangled underbrush and undisturbed,” is where she feels most at home and able to interpret what she feels as opposed to what she sees around herself. In her own manner of accumulating information, there is an order in herself to truly absorb what she feels and not only to pay attention to the outer sensations but to the inner as well. Davis enjoys the places “where people have yet to interfere with,” she’d stated.
Working from her own photos to kick-off her creative juices flowing, enabling her to pinpoint areas of intrigue and to draw her audience’s attention into a more deep and meaningful sense her paintings convey. Transferring an “ordinary scene and cutting into it to find the light and texture I’m looking for,” Davis said, is something instinctual, integral and happens often without trying. With a strong grasp of who she is and who she’s becoming still both internally and externally coalesces within her works as her paintings bring feelings and emotions through what the earth is telling her, feeding her. Each point of view of every landscape is never to be taken point blank but to be felt and looked at for deeper meanings and correlations to the self and to Mother Earth instead of taking things solely at face value.
“Before I start a piece of work, I ask myself; what is the image saying and what does it want me to say. Every landscape, scene or picture has a voice and it’s up to us to translate that,” Davis said.
Although primarily self-taught in her craft, Davis still will often paint with friends from The East Central Ontario Art Association as they feed off one another and are good influences equally she says without haste, there is no harsh judgments but optimistic views. Funnily enough, Davis admits that, “I don’t think people know that I am as spiritual as I am. It’s a strong influence in my work but I can come across as quite cynical,” she said.
When Davis was a little girl she’d use to sew but nobody in the family was any sort of enthused by the arts culture severely. This, ultimately led her to discover things more on her own rather than with others or in being shown different artists, art styles and archetypes at a young age. There is only so much schooling and preparation you can take before you need to step into your own and become acquainted with the field you so aspire to be a part of Davis reprimanded and “as my work has developed I’ve had different influences,” people like Kathleen Earthrowl and Turner to name a few are some of Davis’ additional influences. Also to be noted are artists such as: Brian Atyeo, Drew Klassen, Blu Smith and Erin Hanson who she absolutely adores and looks to continuously recently becoming more indulgent in the abstract side of art, Davis said.
After every session of working on a painting, Davis mentioned she cleans her palette completely. This is so to start fresh and new for her next sessions. Rich in colours and undefined definition of natures beauty, Davis said, “I started in water colour – size was limiting and glass was a barrier. I did acrylic, but it’s plastic and feels artificial. Oil has life, it has an essence that lends itself to discovery. It is consistent in its texture and colour,” she also mentioned that she isn’t “a detail oriented person,” stating, “I see energy and movement in space. Not stagnant details.”
Usually Davis will “’rough in’ the image” playing with oil sticks and scribbling loop like figures to loosen and open up her space before giving them real movement when she goes in for a second or third session. The second and third days she’ll go in with heavier paints to help define previous light strokes or places of interest. Picking out highlights and areas that catch the eye, like small shocking instances in paintings or pictures that automatically capture the attention of a passerby.
For more information visit Sheila Davis’ website at: www.sheiladavis.ca.

​Please  note that,  although every effort is made to accurately photograph the artwork, colour settings vary on monitors, smartphones and tablets.   Please feel free to contact me with any concerns or questions.
All content © 2019 Sheila Davis